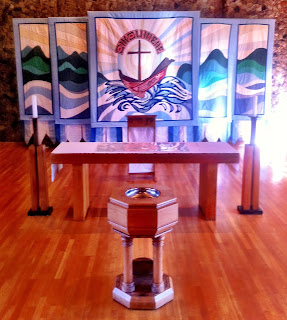 It was August 1983 - yes, thirty years ago - when the 6th Assembly of the World Council of Churches met here in Vancouver. Tomorrow - October 30 (which is already today in Korea) the 10th Assembly of the World Council of Churches begins its gathering in Busan, Korea. We are marking the thirtieth anniversary of the 6th Assembly and praying for the 10th assembly throughout its meeting (Oct 30 - Nov 8). Our memories and our prayers will be focused by the worship banners from the 6th Assembly which we have placed in the Chapel of the Epiphany, worship home of the Vancouver School of Theology and of University Hill Congregation for the duration of the 10th Assembly. This coming Sunday, November 3 at 10:30 am we at University Hill Congregation will mark All Saints Day with a celebration of the Eucharist and a Rite of Healing. We hope that the congregation on this occasion will include guests who were active in providing leadership for the 6th Assembly in 1983. There is an interesting story behind the banners ...

The 6th Assembly not only met in Vancouver but did so on the campus of the University of British Columbia which is where University Hill Congregation gathers to worship and has its offices. The lone picture of the 6th Assembly that I can find on the World Council of Churches' website shows a banner for the assembly in front of one of the Gage Towers - a student residence that I look at from my office window. The plenary sessions for that Assembly were held in the UBC gymnasium. But the planners were faced with a challenge when trying to locate a suitable worship space for a gathering of such size. There was an opening day celebration in the Pacific Coliseum - Vancouver's large hockey arena, with over fifteen thousand in attendance. However, the regular daily worship of the assembly required a large venue closer to the university campus. There are no large churches or cathedrals in the vicinity. Traveling to one would have required moving thousands of people by bus to Vancouver's downtown core. At the previous five assemblies worship had usually taken place in a cathedral setting. What to do?

A suggestion was made that perhaps a very large tent could be erected on campus so that the assembly could walk from its plenary sessions and residence rooms to worship daily. Initially this idea was met with some resistance as a tent seemed a rather humble location for such an important occasion. However, on second thought, the memory of Israel traveling through the wilderness with a tent/tabernacle as its worship home reminded the church of the portability of worship. It also helped the assembly experience the journey out of Christendom and into a new time of wilderness wandering that is an identifying feature of the church in our time.

The worship tent needed a table for communion. A local United Church minister, Jack Shaver, constructed it out of plywood. That was the Lord's Table at which the Archbishop of Canterbury was one of seven who co-celebrated the Lima Liturgy - a significant occasion in the history of the church's worship life, bringing together Protestants, Catholics and Orthodox at the Table after centuries of division. The banners for worship that stood behind the Table were created by a local team to represent the theme of the 6th Assembly - "Jesus Christ: The Life of the World". They incorporate the World Council of Churches logo of a ship at sea under a cruciform mast and the world "Oikoumene" while setting it in the context of Canada's west coast. The worship tent was erected on what was then a large open space at UBC. It is now occupied by a Presbyterian student residence and apartments. The spot is right across the street from our worship home at the Vancouver School of Theology. In many ways the event is long forgotten. But for those of us who had the chance to experience it, the memory is fresh. We are grateful that the banners from the worship tent are in the safekeeping of the Anglican Archives of BC. We are also fortunate that our minister of music, Gerald, was given a set of communion vessels from the 6th Assembly. We will use these in our celebration of the Eucharist this coming Sunday.

In 1983 I was entering my fourth year as a pastor and was serving a congregation that was a forty-five minute drive from UBC. My memories the Assembly are rich. I recall Coretta Scott King's moving address as she was getting ready to mark the 20th anniversary of Martin's "I have a dream" speech/sermon in Washington. There was the dramatic arrival of Desmond Tutu from South Africa after the South African government had initially denied him a visa to travel. There was the great procession of religious dignitaries at the opening day celebration in the Pacific Coliseum in their regalia ... and then the preacher stepping forward into the midst of the huge crowd - it was Jean Vanier plainly dressed in a plaid shirt, speaking so powerfully, simply, beautifully ... a Catholic lay person who was truly our priest. And there was the worship in the tent. It was powerful, moving, rich. Praying the Lord's Prayer aloud and hearing so many languages all at once - a pentecostal experience. And singing ... oh, the singing. The 6th Assembly is mostly remembered, I think, for the music. It was a break-through moment when we heard the song of the church beyond western European rhythms and melodies and languages. The music was African, Asian, Latin American, Eastern European and more. On Sunday here at UHill we will remember the Assembly especially through the music we sing. The 6th Assembly may have departed in 1983 but it left the music behind. And we are grateful!
Posted by Ed Searcy at 4:44 PM

Email ThisBlogThis!Share to TwitterShare to FacebookShare to Pinterest
Labels: scribbles

Ed Searcy
A preacher and a scribbler living with multiple myeloma, check out my bio for more. On twitter @searcy_ed.